Antoine Françoise and Robin Green are the 1st prize winners of the Nicati Competition in Switzerland and the Royal Overseas league competition for Chamber music in London. They were runners up prize winners in the 2015 international Franz Schubert piano duo competition and are former Park Lane artists. The Françoise-Green Piano Duo has performed recitals at Wigmore hall, Kings Place, St David’s Hall and the Purcell Room. Their festival appearances include the Davos Young Artist Festival, IRCAM’s Manifeste festival, Biennale Bern, Les Jardins Musicaux festival, Occupy The Pianos festival, the Brighton International festival the Vale of Glamorgan festival, the Lake District international music festival and the Edinburgh fringe festival. Since 2008, Antoine and Robin have relentlessly promoted the art of piano duo. Their substantial repertoire for piano duo/duet ranges from Mozart to Ravel to Kurtág. With a shared passion of the contemporary music repertoire, Antoine as a pianist-composer and Robin as a pianist-conductor started their collaboration with a performance of George Crumb’s Music for a summer’s evening. Since then, the duo has been responsible for over 50 world premieres, including pieces by Hanspeter Kyburz, Ruaidhri Mannion and Gavin Higgins. The duo has also developed a strong relationship with Stockhausen’s 70 minute masterpiece Mantra, performing the piece in the UK, Switzerland and France. Dedicated chamber musicians, they have collaborated with the Aurora Orchestra, Cavaleri Quartet, Rolf Hind and Richard Uttley. Past highlights include a complete Beethoven symphony cycle, performances of the Poulenc and Mozart concertos, and performances of Saint-Saens Carnival of the Animals. In 2016, The duo will release two recordings. The first includes works by Bach, Kurtag and Schubert, released with the Swiss label Claves. The second recording is music by the British Composer Kenneth Hesketh for 2 pianos and piano duet, released through the Prima Facie label. Former recipients of the Leverhulme Junior Fellowship in Chamber Music at the Royal College of Music, Antoine and Robin met as students of Yonty Solomon and Andrew Ball. Complimenting their studies, the duo has participated in masterclasses with Stephen Kovacevich, Ferenc Rados and Dénes Várjon, with whom they studied at the Prussia Cove International Musicians Seminar. Highlights for the coming season include the Viennese salon residency at St John’s Smith square, which will include the complete Mozart piano sonatas for piano duet, a selection of four hands masterworks by Schubert and arrangements of the iconic orchestral pieces of the second viennese school: Schoenberg’s two Chamber symphonies, the orchestral interludes from Berg’s Wozzeck, a new arrangement of Lulu suite as well as Zemlinsky’s epic arrangement of Mahler’s sixth symphony. To complete this residency, each concert will feature a new addition to the repertoire by young composers Vlad Maistorovici, Christian Elliott, Colin Alexander, Alissa Firsova and Christian Mason. 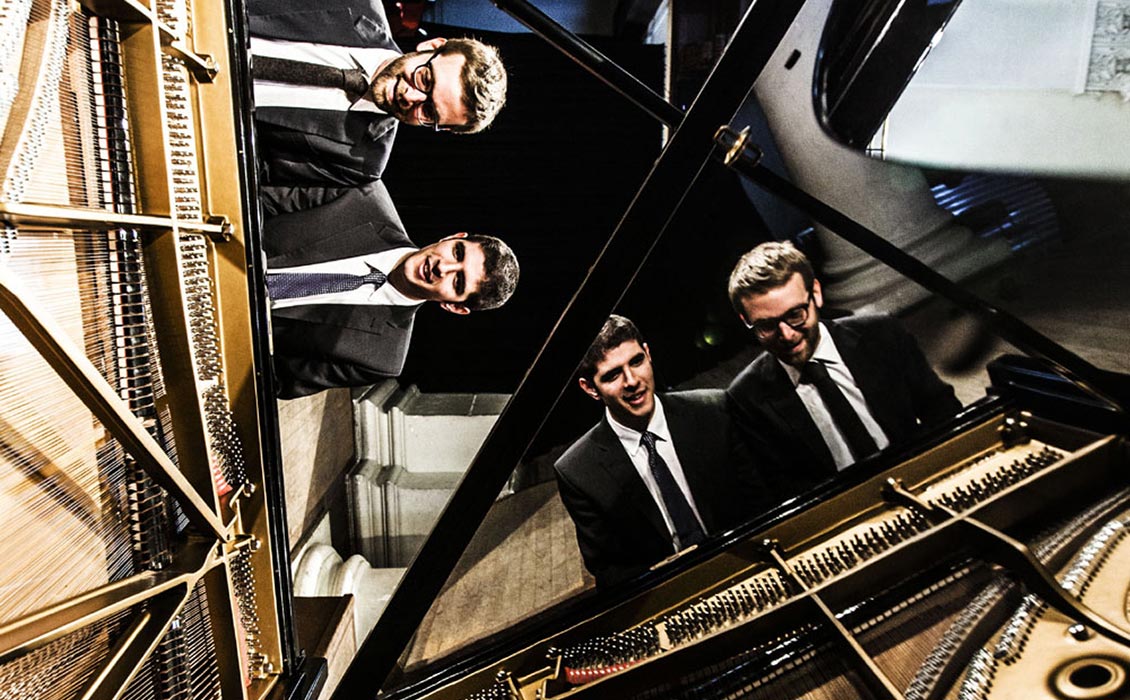