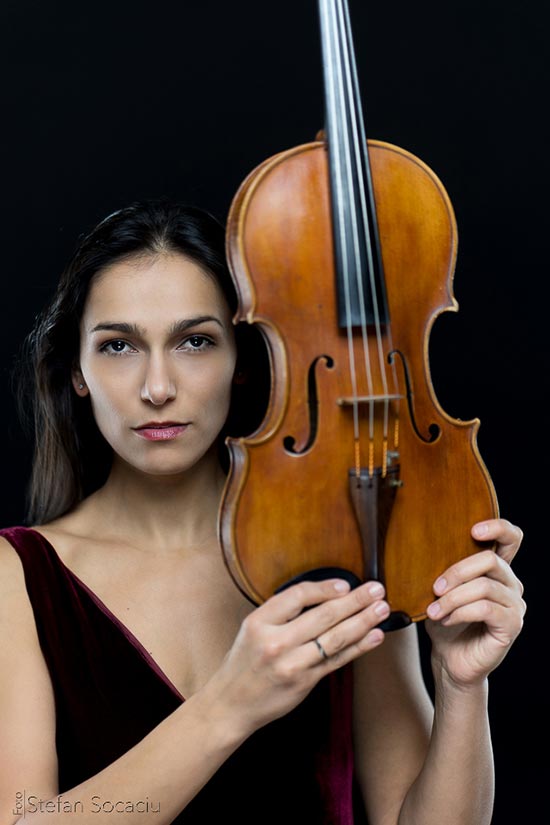 Aida-Carmen Soanea, an eclectic and charismatic violist, is born in Romania into a family of opera singers. In 2005 she won the 1st Prize of the Valentino Bucchi Competition in Rome – and in 2000 the 2nd Prize at the Bashmet Viola Competition in Moscow. She had previously won the 1st Prize with distinction at the age of 17 in the German national competition Jugend Musiziert and had been then admitted in the class of Barbara Westphal, at the Lübeck Musikhochschule. She has also been graduated with distinction at the Hanns Eisler Hochschule (Berlin) in the class of Kim Kashkashian and at the Conservatoire Supérieur de Paris with Gérard Caussé.

As a soloist, Aida-Carmen has appeared in music festivals such as the Internationale Osterfestspiele Luzern, Rheingau Musikfestival, Musikfestspiele Sanssouci, Musikfestival Mecklenburg Vorpommern and she performed with different ensemble formations, including the Gustav Mahler Youth Orchestra,  the English Youth Orchestra, the European Chamber Orchestra and the Berliner Symphoniker. She shared the stage together with violist Tabea Zimmermann at the Cité de la Musique of Paris, with violinist Renaud Capuçon at the Lucerne Spring Festival, with the violinist Tanja Becker-Bender for her debut in the big hall of the Berlin Philharmonie and with the violinist Tasmin Little by performing the Mozart’s Sinfonia Concertante throughout England.

An avid chamber musician, Aida-Carmen regularly performs with the pianists José Gallardo and Andrej Jussow, she performed with Natalia Gutman and Kolja Blacher as well with Reiner Kussmaul, with whom she appeared several times at the Berliner Festwochen. Aida-Carmen also has been a guest of many European festivals, where she collaborated with musicians as the Alissa Margulis, Alfredo Perl,  Alexander Melnikov, Jean-Quilhem Queyras, Adrian Brendel etc.

From 2007 to 2015 Aida-Carmen Soanea was a founding member of the delian::quartett. In that chamber music formation, she appeared at Schleswig-Holstein Musikfestival, the Ludwigsburger Festspiele, the Schwetzinger Festspiele and many others. The quartet performed in the Vienna Musikverein, the Festspielhaus Baden-Baden, the Essen and Berlin Philarmonie, the Hessischer Rundfunk Frankfurt and in many other major concert venues throughout Europe, enjoying a great success and releasing a notable discography for the label Oehms Classics. Aida-Carmen Soanea’s relation with the contemporary music is for her essential; her regular participation in the Ensemble Modern of Frankfurt being an important part of it. She’s using to work together with different living composers, several works being dedicated to her.

After many years of researches, she publishes in 2016 her first solo CD for the label Challenge Records with Norbert von Hannenheim’s (1898-1945) works who had been a pupil of Arnold Schönberg at the Prussian Academy of Arts in Berlin and died after the end of the 2nd World War in a mental institution near Berlin. Also in 2016, she has been performing Berlioz’s Harold in Italy during a long tour in Romania, started collaborating with the fortepiano player Antonio Piricone and founded the Vesna Ensemble together with the violonist Nathalia Prishepenko and the cellist Romain Garioud.