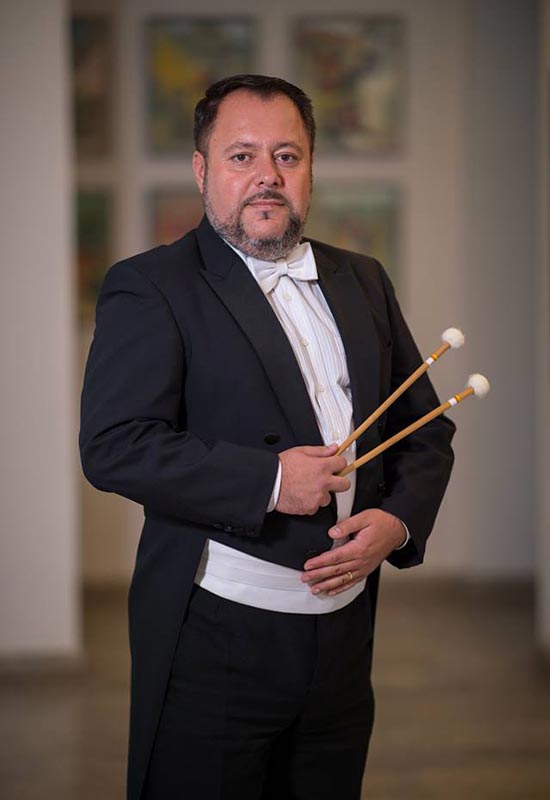 Born in 1976 in Bacău, percussionist Ovidiu Cornel Nauncef has studied at the Arts Highschool of Bacău, class of Prof. Dan Bădilă – first timpanist of the Philharmonic Orchestra of Bacău. From 1996–2000, he studied at the Musical Faculty of Brașov at the class of Univ. Prof. Laurențiu Băcanu – first timpanist of the George Enescu Philharmonic Orchestra of Bucharest. In 1992, he participated in the National Contest Spring of the Arts from Bacău, where he won the first prize. During faculty, he founded the first percussion quartet of Brașov – the Astral quartet, alongside which he held recitals both in Brașov, and in other Romanian cities. Starting from 1997, Ovidiu Nauncef is a member of the Brașov Philharmonics, and since 2012, he is a chief of the percussion team. From 2003–2006, he has been an associate professor at the percussion chair of the Arts High-School from Brașov, and from 2007–2010 he has been a percussion teacher at the Arts Highschool of Târgoviște, and the first professor of this percussion chair. From 2007–2012, he has been the chief of the percussion team, at the Târgoviște Philharmonic Orchestra. From 2004–2010, he has been an associate university professor of the percussion chair of the Musical Faculty of Brașov, within the Transilvania University of Brașov. Ovidiu Nauncef has held countless recitals and collaborated with many philharmonic orchestras from Romania and abroad, performing tours in Italy, Germany, Austria, Switzerland, China, Spain, Hungary, the Netherlands, Japan etc. Percussionist Ovidiu Nauncef has had a rich concert activity alongside groups and renowned artists at national and international level: Iris, Direcția 5 (with whom he performed in the opening of the Golden Stag International Festival–2008), Aura Urziceanu, Monica Anghel, Marcel Pavel, Gheorghe Zamfir, Marius Mihalache, Ramona Bădescu, Nicola, Angela Similea, Nicolas Simion, Costel Busuioc, Tudor Gheorghe, Florin Piersic etc.nHe is currently part of the Academic percussion quartett and the NaunArt quartett, alongside which he unfolds a rich artistic activity.